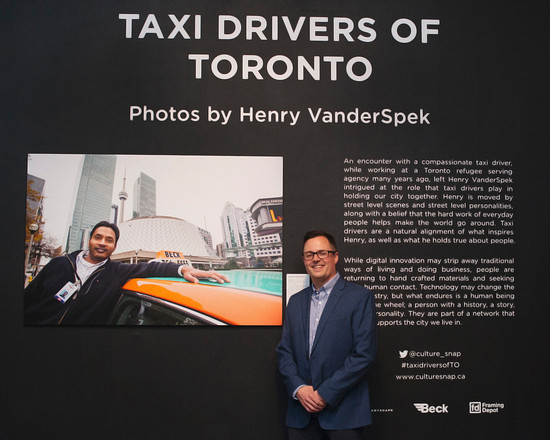 Culture Snap Photography features images by Henry VanderSpek. Whether in city streets of North America and Europe or the dusty roads of rural East Africa, Henry finds joy in capturing vibrant local atmosphere and drawing the viewer in to celebrate the many ways that people live a full life.

Henry's images have been published on TheGlobeandMail.com, BlogTO, CTV Ottawa, Vice Canada, CNN.com and several local Canadian newspapers. In 2021 he worked with East End Arts and GreekTown on the Danforth BIA to document and to celebrate Humans of the Danforth. His 2021 Contact Photo Festival exhibit Old World Shoes, which celebrates independent shoe and shoe repair stores of Toronto, was featured on CBC Radio's Metro Morning, CBC Toronto's 6:00 PM news and by the Bata Shoe Museum. It also won "Best in Exhibition" in the 2022 DesignTO Festival. Taxi Drivers of Toronto, in the 2017 Contact Photo Festival, was covered by CBC Radio's Here and Now, CBC Toronto, Now Toronto, Beach Metro and Photo Life Magazine. His images have won awards from Ryerson University's Chang School (2014) and Vistek Camera (2012). His Toronto street scene images have been displayed in the Toronto City Hall offices of Councillor Janet Davis and Councillor Mike Layton. Each year Henry exhibits his art images in several outdoor art shows, such as the Queen West Art Crawl, Toronto Outdoor Art Fair, and Danforth East Arts Fair.

Henry loves exploring cross-cultural understanding and working with non-profit organizations. Since living in Tunisia and studying Arabic in the early 1990s, he has worked on a documentary series about Canadian multiculturalism, served refugee claimants from around the world at Matthew House (2001-2004), and has led cross-cultural training for a variety of groups. From 2004-2012 Henry worked in World Vision Canada's Advocacy & Education department equipping a national network of campus clubs and youth leaders, as well as Youth Ambassadors from Canada and East Africa. He continues to enjoy assisting non-profit organizations with their visual communication needs.

Henry's training in photography comes from Ryerson University's Chang School (where he earned a certificate in Photography Studies), classes and courses at Henry's School of Imaging, and from capturing images overseas during his his work with World Vision. In August 2013 Henry went to Uganda with Photographers Without Borders to document the work of the local NGO Raising Voices. Those images were shown across Canada thanks to the kind support of Vistek. More info on the Vistek galleries, and Henry's work, can be found here.

Click here to see a portfolio of Henry's published or recognized work.

Henry lives with his wife and three children in East York. He is available for photojournalism assignments, to document your organization in images and words, for event photography and creative portraits and is always looking for interesting venues to display his work. To be informed of upcoming shows and events, follow him on Facebook, Instagram, Twitter or send an email to receive periodic email updates.